Texas Hunt Lodge offers hunts for the very rare and unique (to Texas) Thomson Gazelle . We have the very best selection of Trophy Thomson's gazelle to be found anywhere in the world. There are no seasonal restrictions on hunting the Thomson's gazelle in Texas, which makes it a suitable trophy year round.

We typically let our hunters choose the method of hunting Trophy Thomson's gazelle that they prefer, but your guide will recommend what method he thinks will work best. Hunters of Trophy Thomson's gazelle can choose the Spot and Stalk method, Bow Hunting, Rifle Hunting, Black Powder, Safari Style Hunting, Handgun, as well as hunting from a Blind. We can accommodate hunters of any age and experience level, as well as hunters which have physical disabilities or may be confined to a wheelchair.

The Thomson gazelle which we hunt must be booked in advance due to the limited availability for this species. We ask for 1-2 months advance booking but can sometimes accommodate on short notice.

Thomson's gazelle (Eudorcas thomsoni), referred to also as the "tommy",  originate from Africa's Grassland Habitats, i.e. the Serengeti region of Tanzania and Kenya.

Thomson's Gazelles are one of the most popular species of the Gazelle Family.  The Thomsons Gazelle stand 2-3 feet tall and weigh between 30-40 lbs typically.  The Gazelle has a light brown coat with a distinctive Black Stripe, and white belly.  Many mistakely identify the Thomson's Gazelle with the Grant's Gazelle...the difference is the white rump on their backside extends above the tail.

The Thomson gazelle usually congregate with other animals in the wild such Zebra ,and migrate and live in herds with other Gazelles numbering in the hundreds and thousands.  In the wild, Thomson's Gazelles live 10-15 years and give birth to single fawns after only a 5-6 month gestation period. 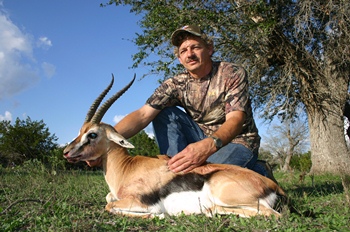 Included with the Gazelle Hunt Package 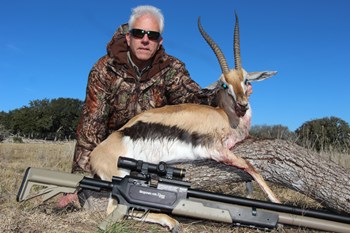