Texas Hunt Lodge guides will put you on many different species of Sika Deer.  We have the very best selection of Trophy Sika Deer to be found anywhere in the world including Dybowski Sika Hunts, Manchurian Sika, Formosan Sika, and Japanese Sika. There are no seasonal restrictions on hunting the Sika Deer in Texas, which makes it a suitable trophy in the months of August to March, when they typically drop antler.

We let our hunters choose the method of hunting Trophy Sika Deer that they prefer. Hunters of Trophy Sika Deer can choose the Spot and Stalk method, Bow Hunting, Rifle Hunting, Black Powder, Safari Style Hunting, Handgun, as well as hunting from a Blind. We can accommodate hunters of any age and experience level, as well as hunters which have physical disabilities or may be confined to a wheelchair.

We currently have access to a great number of Manchurian and Dybowski Sika Deer that have huge antlers (4X4, 5X5), and you will see many Sika deer to choose from before we settle on your Trophy Sika Buck.

Sika Deer are truly an exotic species and will make an excellent addition to your exotic trophy collection.  They are small to medium-sized and in general are compact animals with a short wedge-shaped head.  Sika deer can range in color from mahogany to black.  They can be but are rarely white.  All colors carry a distinctive black dorsal stripe from the base of the skull to the tail.

The antlers of an adult male are usually 8 tines but antlers having 5 or 6 tines per side sometimes occur.  Females carry a pair of distinctive black bumps on the forehead.

The Sika Deer are closely related to Red Deer, Central Asian Red Deer and elk.  The Sika deer found in the Texas Hill Country stem from several different sub-species including Manchurian Sika deer, Dybowski's Sika, Japanese Sika, and the Formosan Sika.  Formerly, Sika was native from southern Siberia and the adjacent Japanese island of Hokkaido south, along both the mainland and islands, to southeastern China and Formosa.  They are disappearing rapidly from their range due to habitat loss, but Sika were introduced to 77 counties of central and southern Texas in 1939, with free-ranging populations known from 12 of these counties.  The last count in 1988 showed the total Texas population to be in the upward 11,000.

Smallest is the Japanese sika (Cervus nippon nippon), which is native to the main islands of Japan. It stands about 31 inches (79 cm) at the shoulder and weighs about 105 pounds (48 kg). The summer coat is reddish-brown with many white spots, changing to dark brown without spots in winter. The sharply defined white rump patch is broken by a narrow, dark tail stripe. (Another small sika deer found in Texas is black year-round without white spots or rump patch. It has always been called Japanese sika and is thought to be a color phase.) Mature bucks have four points on each antler and a beam length of 16-18 inches (41-46 cm).

Considerably larger is the Formosan sika (C. n. taiouanus) of Taiwan, with a shoulder height of 38 inches (97 cm) and weight of about 175 pounds (79 kg). It is a very beautiful animal, with a summer coat of bright chestnut with prominent white spots, becoming a little more drab in winter with the spots less prominent. The white rump patch has a noticeable black border and the black tail stripe is more pronounced than in the Japanese sika. Antlers have four points on a side and 18-22 inch (46-56 cm) beams. Listed as endangered by the USF&WS (1979) and the IUCN in its native land, it may actually be extinct in the wild, surviving only in zoos and private herds in other parts of the world.

Larger still is the Manchurian sika (C. n. mantchuricus), which is native to southern Manchuria and Korea. It stands 38-40 inches (97-102 cm) at the shoulder and weighs as much as 240 pounds (109 kg). The summer coat is a rich chestnut-red with rather faint spots, and a white rump patch bordered with black. This changes in winter to deep brown on the body and bluish-black on the neck, with the spots barely discernable. Trophy antlers will measure 24-26 inches (61-66 cm), with four points (sometimes five) to the side.

Largest race in Texas (and in the world) is the Dybowski or Ussuri sika (C. n. hortulorum) from the Ussuri region of southeastern Siberia and eastern Manchuria, and northeastern Korea. (It should be noted that most biologists now consider Manchurian and Dybowski sika to be the same animal.) Shoulder height is as much as 43 inches (109 cm) and weight may be 250 pounds (113 kg) or more. The summer coat is reddish-fawn, with small white spots that extend onto the neck and often fuse into rows on the flanks. The coat turns dark yellowish-brown in winter, with spots barely visible or not at all. There is a vague dorsal stripe, the white rump patch is bordered with black, and the upper surface of the tail is reddish with a black stripe. Antlers measuring 28-36 inches (71-91 cm) have been recorded in Siberia and Manchuria, usually with four points to the side, but sometimes with five or even six.

All sub species of sika will interbreed and-because few ranchers in the United States have kept the subspecies separate-the result is a multitude of hybrid forms. While sika deer on some ranches may appear to be purebreds of this or that subspecies, there is no way to be certain. For this reason, all North American specimens are combined for Record Books including Safari Club International.

Typical sika deer antlers have four points to a side-the main beam plus three tines. A strong brow tine grows close to the burr, a trez tine (no bez tine in sika deer) grows from the top or front of the main beam, and an inner top tine grows on the inside of the beam to form a forward-facing terminal fork. Some sika stags will have additional tines, which usually are basal snags or extra top tines, and these tines are always non-typical.

Sika Deer meat is probably the strongest flavored venison meat, which leaves much interpretation to be made.  The Chinese fancy the meat, while many Americans dislike its strong gamey taste.  Book your hunt with Texas Hunt Lodge today and get your beautiful trophy Sika deer! 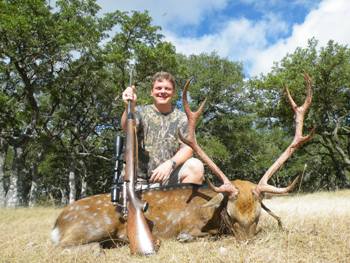 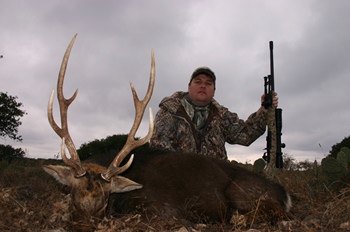 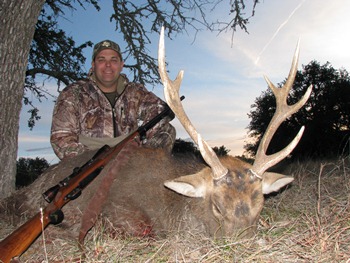 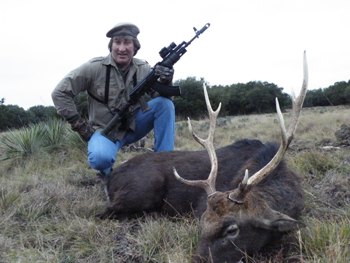 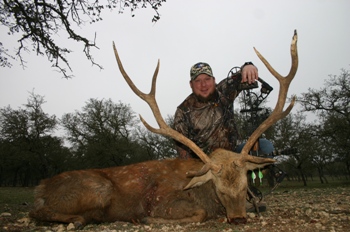 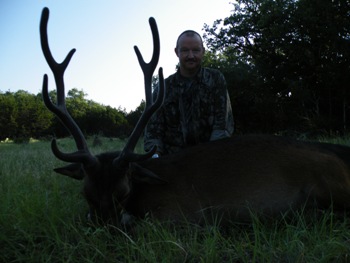 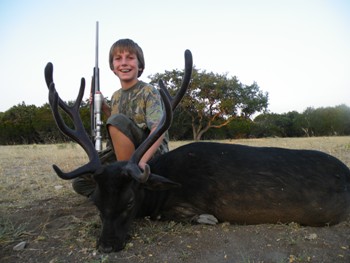 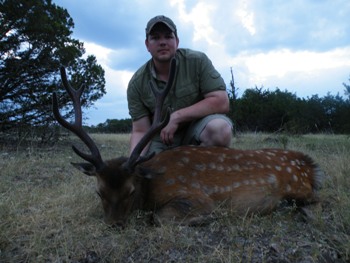 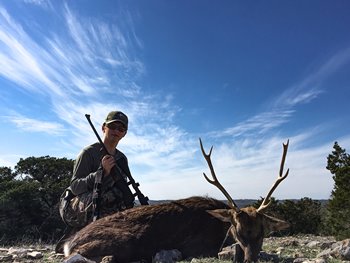 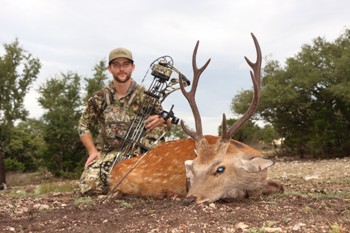 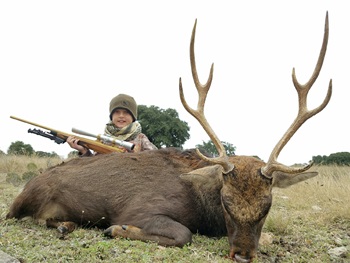 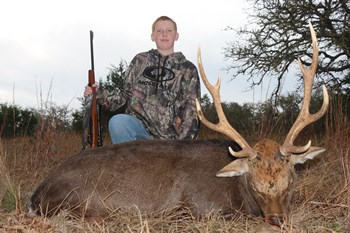 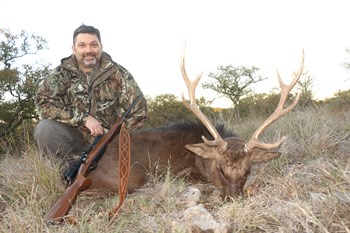 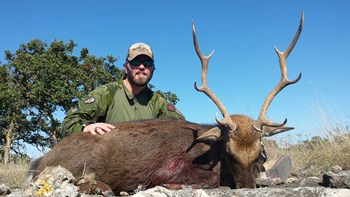 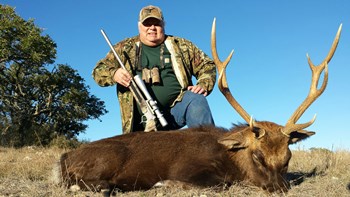 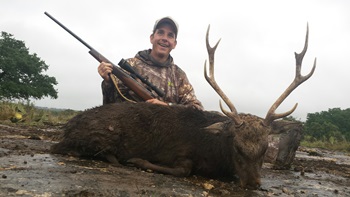 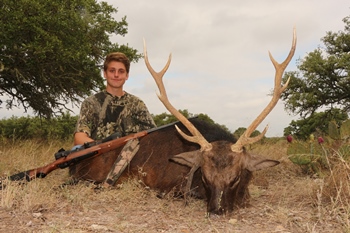 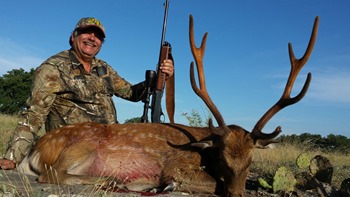 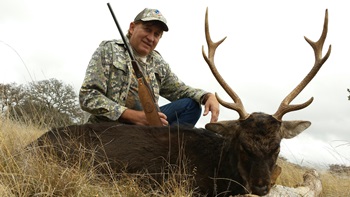