We typically let our hunters choose the method of hunting Trophy Blue Wildebeest that they prefer. Hunters of Trophy Blue Wildebeest can choose the Spot and Stalk method, Bow Hunting, Rifle Hunting, Black Powder, Safari Style Hunting, Handgun, as well as hunting from a Blind. We can accommodate hunters of any age and experience level, as well as hunters which have physical disabilities or may be confined to a wheelchair.

The Blue Wildebeest were once widespread in South Africa north of the Orange and Vaal Rivers; however, they were shot out by early European settlers except for relic populations in northwestern Cape Province and northern and eastern Transvaal, and game reserves in northern Natal. But today they are widely re-established on private ranches in all parts of South Africa and Texas, so the extent of their distribution (not their population) exceeds what existed before Europeans arrived.

The Blue Wildebeest has a very muscular heavy shoulder and abdomen with a distinct muzzle.  The Blue Wildebeest has slender legs, but the most distinguished characteristic of this animal are the large bovine like horns extending outward then up and inward.  In a male Blue wildebeest, the horns can span over 90 centimeters, while the female's horns mass is about half the size of the male. The other difference between male and female wildebeest horns is that the males have a Boss which connects their horns on top of their head.

The Blue Wildebeest are born light brown and take on their adult coloration after 2-3 months of age.  The adult color of a Blue Wildebeest is actually a bluish gray; light gray, or grayish-brown.  They have long thick manes which appear jet black.

Large herds of Blue wildebeest numbering in the thousands can be seen in Tanzania and Zambia in their annual migration. 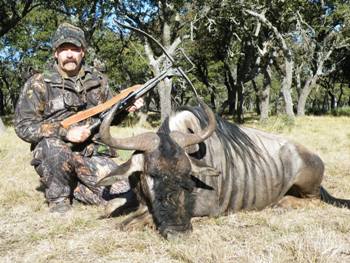 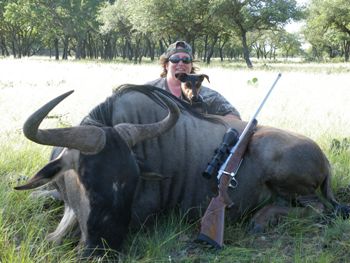 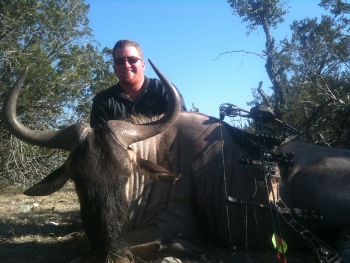 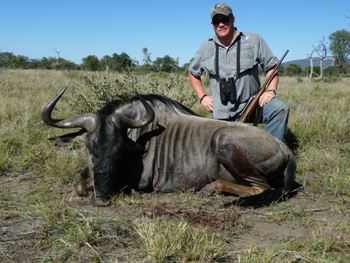