Texas Hunt Lodge has the best Addax Antelope Hunts in the World, Hands Down!  This animal is extremely rare but we have access to one of the largest herds in the world. Year round, we offer hunting for awesome Trophy Addax. There are no seasonal restrictions on hunting the Addax in Texas, which makes it a suitable trophy year round.
We typically let our hunters choose the method of hunting Trophy Addax that they prefer. Hunters of Trophy Addax can choose the Spot and Stalk method, Bow Hunting, Rifle Hunting, Black Powder, Safari Style Hunting, Handgun, as well as hunting from a Blind. We can accommodate hunters of any age and experience level, as well as hunters which have physical disabilities or may be confined to a wheelchair.
The Addax Antelope that we offer on our Texas Hill Country Ranches range from Males and Females with horns in the 30-38 inch range. Most of these Addax were imported from the Sahara Desert to Hill Country ranches originally in the 1970's and now are thriving in the Texas Hill Country environment...the Top 10 World Record Addax have all come from this Area.
Texas Hunt Lodge currently has Addax Hunts for males in the 36" Plus range available.

The Addax Antelope is a desert antelope also known as the screw-horn antelope. Native to the Sahara Desert, the Addax is one of the world’s rarest mammals.  The Addax are native to Northern Africa and were introduced to Texas ranches in the 1970's. Addax, in their native land, have been hunted extensively for their horns, meat and skin.

The Addax Antelope weighs from 130 to 280 pounds.  Extremely rare in its native habitat, the Addax is quite common in captivity and is regularly bred on ranches where they are hunted as trophies. There are fewer than 500 Addax left in wild which makes an Addax Antelope trophy a very rare and exotic one to harvest.

Both male and female have horns and they range in size from 28 inches to 40 plus inches on horn length, measured around the curl.. The coloration of an Addax Antelope will vary but most are some variation of white to yellowish brown on the bodies with a mat of dark brown on their forehead.  Addax Antelope herds contain both males and females and have from two to twenty animals on our ranches. They will generally stay in one place and only wander widely in search of food. Addax have a strong social structure, based on age, and herds are led by the oldest male. 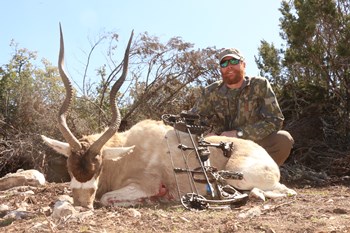 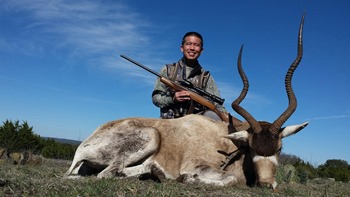 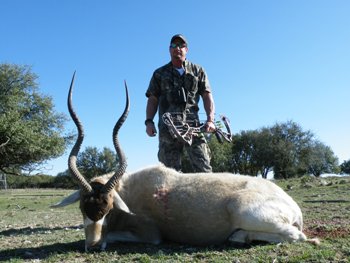 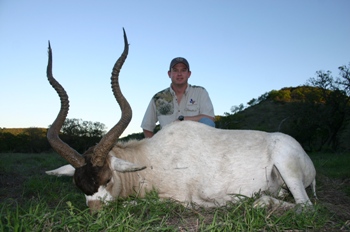 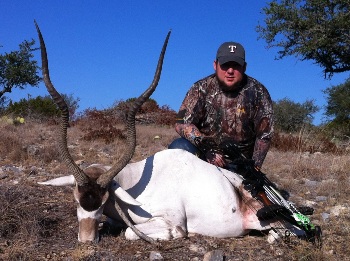 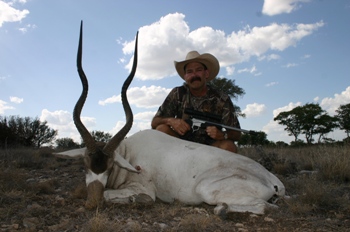 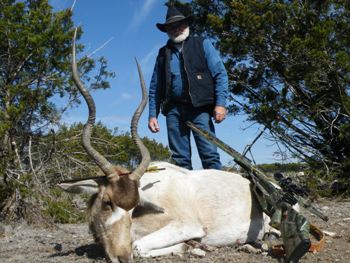 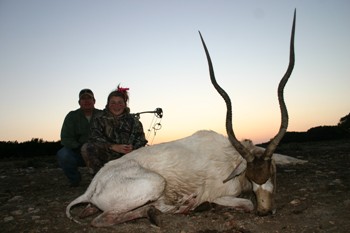 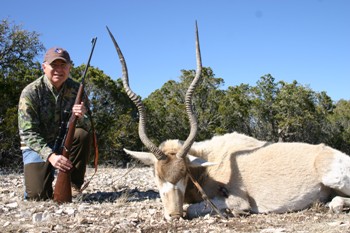 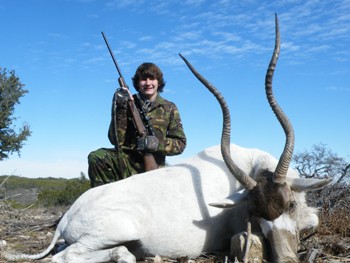 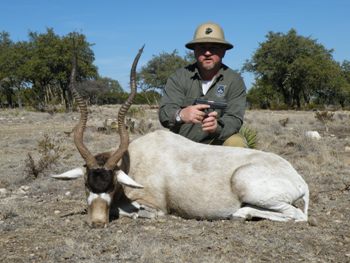 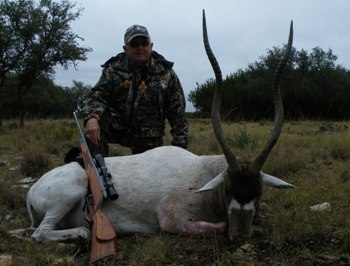 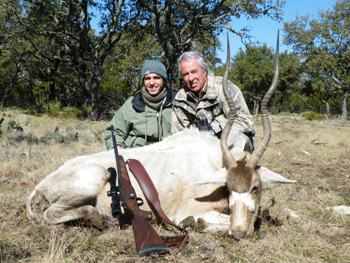 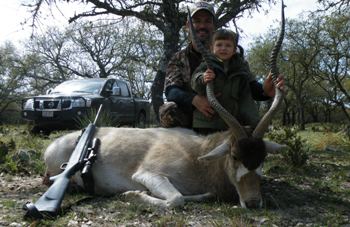 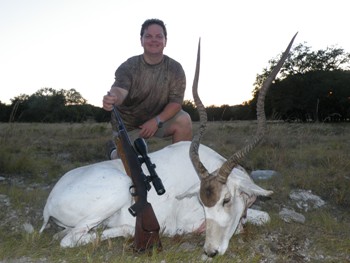 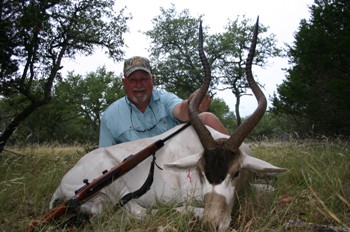 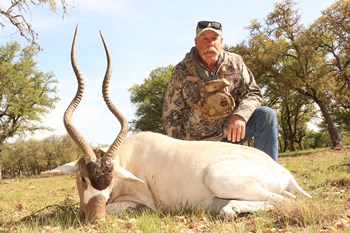 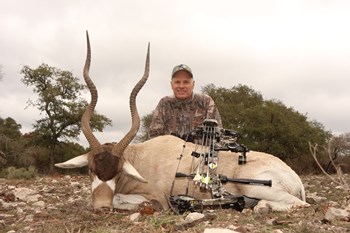 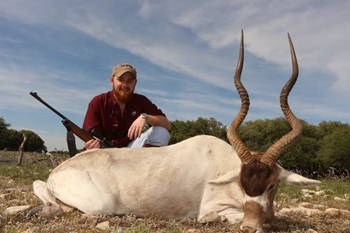 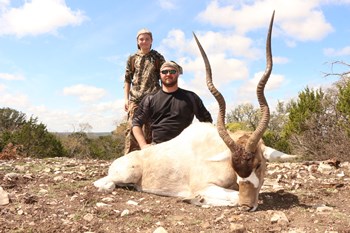 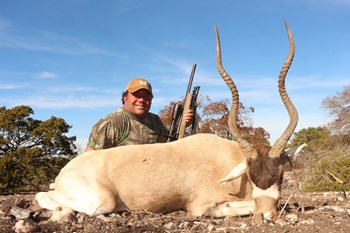 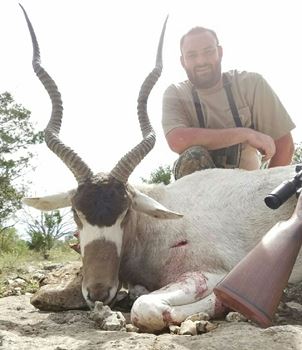 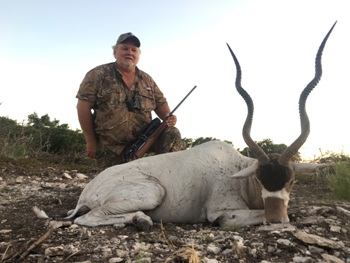 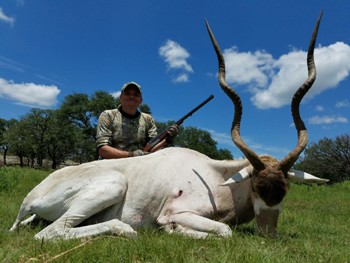 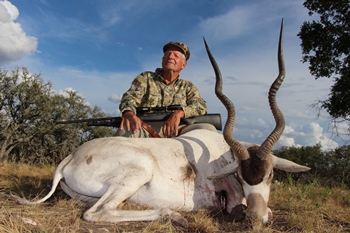 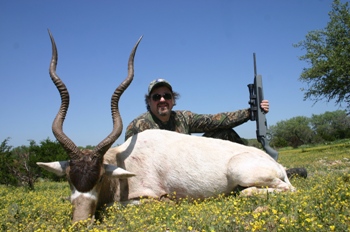 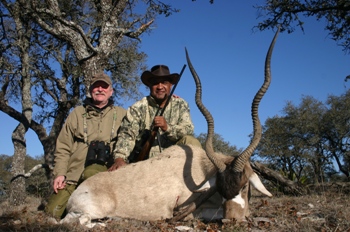 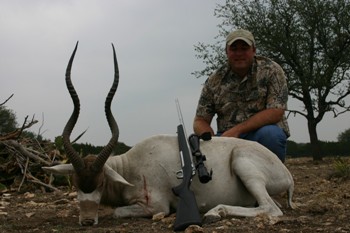